The Split File option in SPSS allows you to split your dataset into subgroups so that you can run the same analyses for each subgroup. SPSS does not split your file physically. Rather it separates your analyses using the categorical variable that you have used to split – or group – your data. Examples of variables that you can use to group your data include gender, race, and college major.

Analyze the Data in Your Split File

Turn Off the Split File Option

The starting assumption for this tutorial is that you have imported your data into SPSS, and that you’re looking at something like the following. (Check out our tutorials on importing data from Excel or MySQL into SPSS). 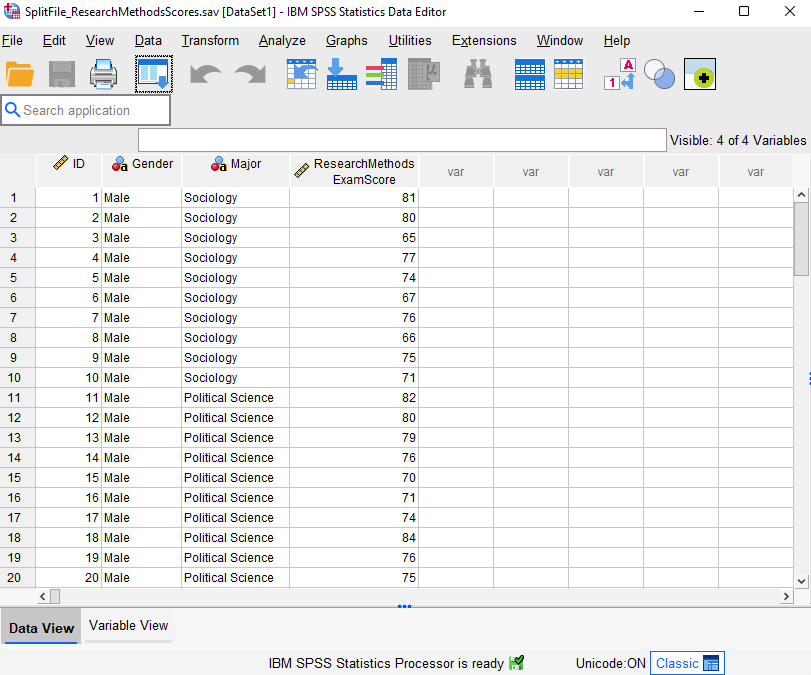 To split – or group – your data according to one (or more) of the categorical variables in your data set (major in this example), take the following steps. 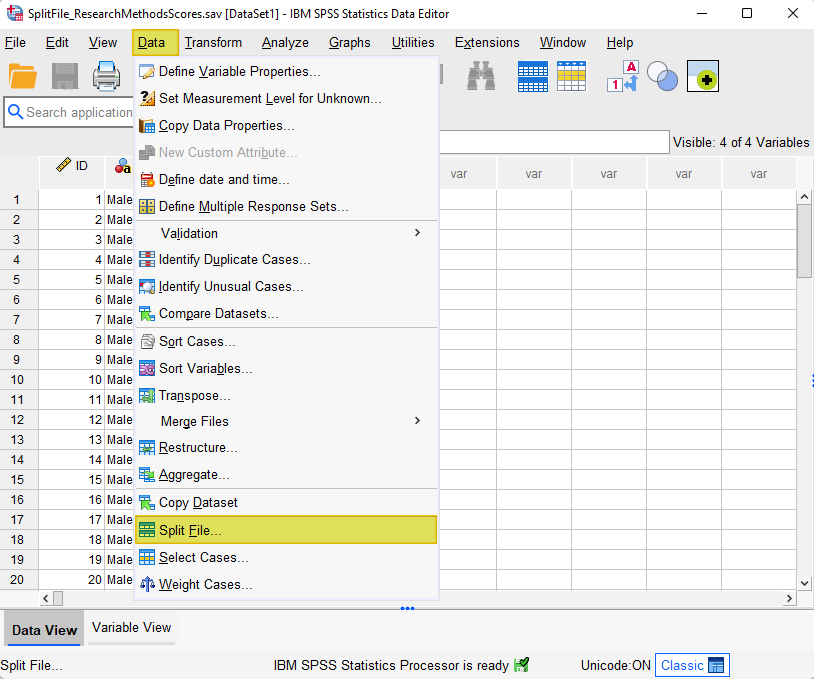 This brings up the Split File dialog box.

Select the variable(s) that you want to use to split your data (major in our example) and use the arrow button to move it into the Groups Based on box.

Ensure that the Sort the file by grouping variables option is selected. 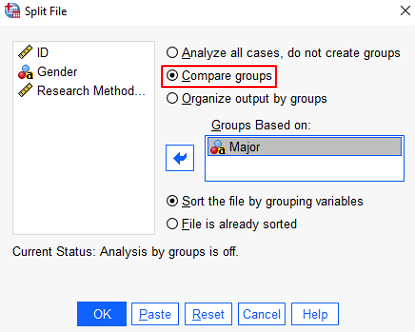 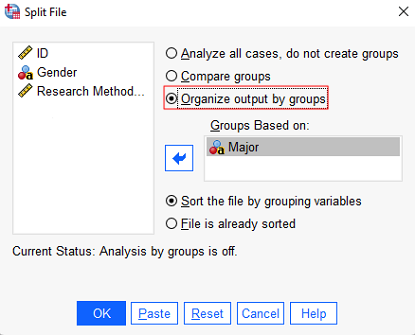 You will notice that your data has now been sorted on the grouping variable(s) that you selected.  So in our example, you can see that all the students in the Economics major are grouped together because we split the file on major.  You will also see a note at the bottom right corner of the screen that tells you that your data set is currently split. 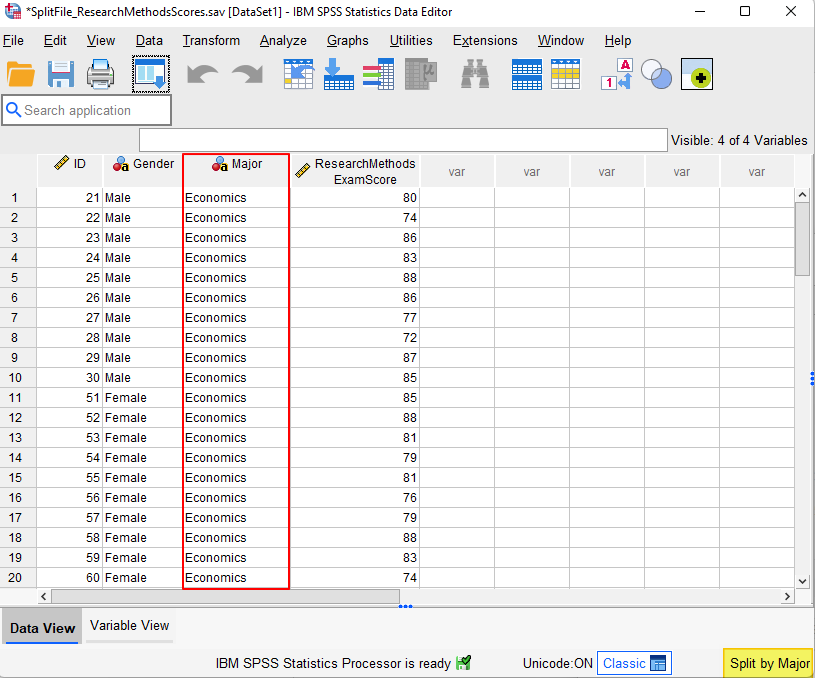 Analyze the Data in Your Split File

Once you have set up the split file option as described above, any subsequent analyses you run in your current SPSS session will be split according to your grouping variable (major in our example).

The SPSS Output Viewer will pop up with the results of your analysis.

If you selected the Compare groups option when you split your file, you will see the analysis for all your groups in one table. If you selected Organize output by groups you will see the results for each group (major in our example) presented in separate tables. The screenshots below illustrate the two options for the same data set.

The screenshot below illustrates that the way that descriptive statistics for Research Methods exam score appear with the Compare groups option.

Our second screenshot illustrates the way that the same descriptive statistics appear with the Organize output by groups option. 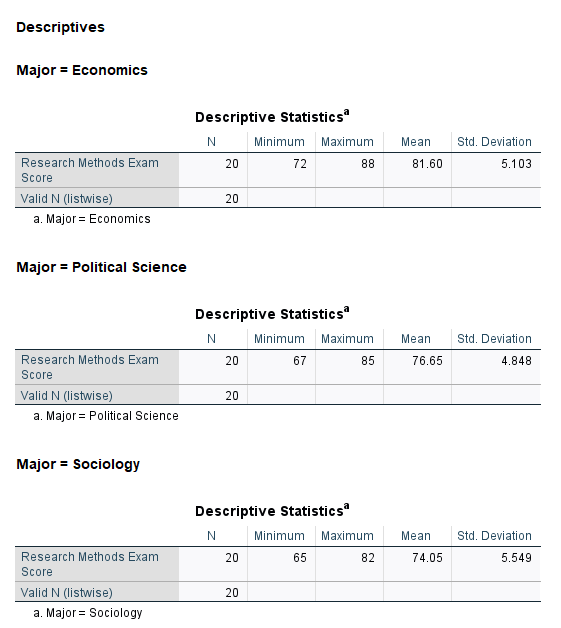 Note that the same data is presented in both of the above options.

Turn Off the Split File Option

Select Reset. After doing this, you will see that Analyze all cases, do not create option is selected as illustrated below. 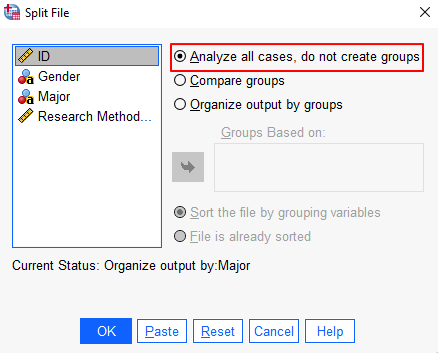 You will also see that the “Split by [YOUR VARIABLE(s)]” message is no longer displayed at the bottom right corner of your Data Editor window.

That’s it for this tutorial.

You should now be able to analyze subsets of your data using the Split File function in SPSS.