This quick tutorial will show you how to interpret the result of a chi square calculation you have performed in SPSS.

The tutorial starts from the assumption that you have already calculated the chi square statistic for your data set, and you want to know how to interpret the result that SPSS has generated. (We have a different tutorial explaining how to do a chi square test in SPSS).

You should be looking at a result that looks something like this in the SPSS output viewer. 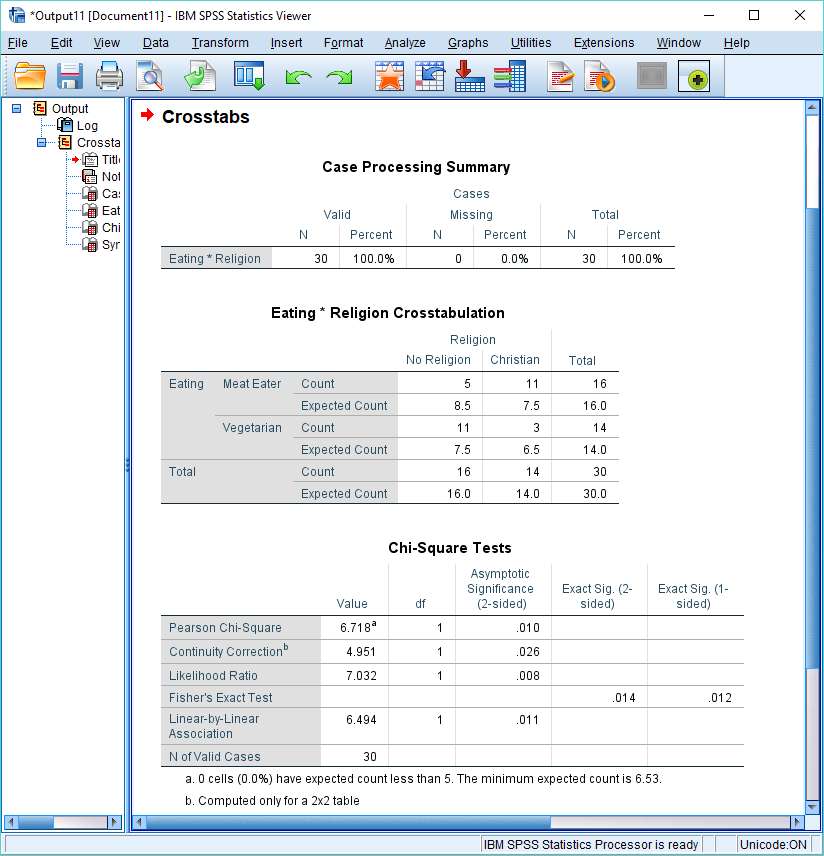 The crosstabs analysis above is for two categorical variables, Religion and Eating. Each variable has two possible values: No Religion and Christian for the Religion variable; Meat Eater and Vegetarian for the Eating variable.

The null hypothesis of our hypothetical study is that these variables are not associated with each other – they are independent variables. The chi square test allows us to test this hypothesis.

The output of a crosstabs analysis contains a number of elements. Let’s look at each in turn.

As its name suggests, the Case Processing Summary is just a summary of the cases that were processed when the crosstabs analysis ran.

In our example, as you can see above, we had 30 valid cases, and no missing cases.

This is the crosstabs table, and it provides a lot of information that is useful for interpreting a chi square test result.

Importance of Observed and Expected Counts

If you want to understand the result of a chi square test, you’ve got to pay close attention to the observed and expected counts. Put simply, the more these values diverge from each other, the higher the chi square score, the more likely it is to be significant, and the more likely it is we’ll reject the null hypothesis and conclude the variables are associated with each other.

The question is whether these differences are big enough to allow us to conclude that the Eating variable and Religion variable are associated with each other. This is where the chi square statistic comes into play.

As you can see below, SPSS calculates a number of different measures of association.

The p-value (.010) appears in the same row in the “Asymptotic Significance (2-sided)” column. The result is significant if this value is equal to or less than the designated alpha level (normally .05). In this case, the p-value is smaller than the standard alpha value, so we’d reject the null hypothesis that asserts the two variables are independent of each other. To put it simply, the result is significant – the data suggests that the variables Religion and Eating are associated with each other.

That’s all for this tutorial. You should now have a good idea of how to interpret chi square results in SPSS. Check out our tutorial on reporting Chi Square results from SPSS in APA format.

The second half of our SPSS chi square video includes a discussion of how to interpret chi square results in SPSS.